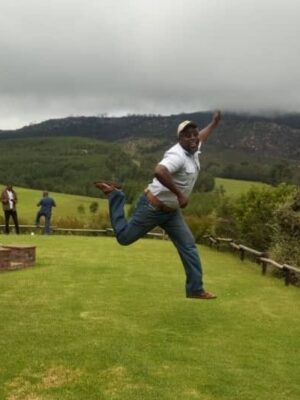 Newton M`ashinge has been a safari guide since 1999, which makes him one seriously experienced and erudite guy. His knowledge of the country is as vast as the country itself and with that being said, it’s no surprise he’s one of our top ranked guides to have on tour.

His career in guiding began after completing school in Khorixas, a small town in the rugged region of Damaraland. Charles began by working for one of the largest safari operators in Africa and through them, completed his field guides training program with EcoTraining in South Africa. He was based at the exclusive Damaraland Camp for 3 years and has since found himself on the open road as a freelance tour guide, having worked with Namibia Tours & Safaris since 2007.

Growing up in Damaraland and with this as the start to his career, Charles’s love for the area runs deep and makes this dry and harsh landscape amongst his favourite on route. To him it is clear as to why even the desert adapted elephants stick around, but of course that’s his great sense of humour. Amongst others, he loves the Namib Desert and the sand dunes of Sossusvlei and in Zimbabwe the view of Victoria Falls.

An excellent guide on all things Namibia, whether geography, wildlife, flora and fauna or culture, Charles’s speciality is birding. He has a keen eye for even the smallest of bird species and those most elusive, with a bank of knowledge on the many bird species in the country, ready at hand.

Although almost two decades in the industry, Charles still wakes up in the morning with the same burning passion and curiosity for the nature of Namibia. Each day different, as are the guests he meets, and this is what excites him most about what he does.

Currently he resides in Arandis, a small mining town northeast of Swakopmund, with his wife and 5 children. A happily married, family man, he’s quite content to be at home when he’s not touring the country, although being in the bush is just as much home to Charles.

“You can never really know the true value of your own home until you have travelled to someone else’s…” This being his favourite quote, Charles looks forward to welcoming you to Namibia with open arms, Namibian charm and his eloquent smile.

Once a plumber, we sure are glad that he left the pipes, tanks and fittings to focus on safari, landscapes and culture of our incredible country, becoming one of the very best guides in Namibia.

This website uses cookies to improve your experience while you navigate through the website. Out of these, the cookies that are categorized as necessary are stored on your browser as they are essential for the working of basic functionalities of the website. We also use third-party cookies that help us analyze and understand how you use this website. These cookies will be stored in your browser only with your consent. You also have the option to opt-out of these cookies. But opting out of some of these cookies may affect your browsing experience.
Necessary Always Enabled
Necessary cookies are absolutely essential for the website to function properly. These cookies ensure basic functionalities and security features of the website, anonymously.
Functional
Functional cookies help to perform certain functionalities like sharing the content of the website on social media platforms, collect feedbacks, and other third-party features.
Performance
Performance cookies are used to understand and analyze the key performance indexes of the website which helps in delivering a better user experience for the visitors.
Analytics
Analytical cookies are used to understand how visitors interact with the website. These cookies help provide information on metrics the number of visitors, bounce rate, traffic source, etc.
Advertisement
Advertisement cookies are used to provide visitors with relevant ads and marketing campaigns. These cookies track visitors across websites and collect information to provide customized ads.
Others
Other uncategorized cookies are those that are being analyzed and have not been classified into a category as yet.
SAVE & ACCEPT