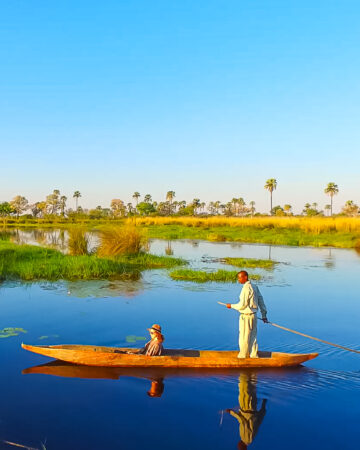 When to visit Botswana

Botswana Travel Info will give you in-depth information to prepare you for your next Botswana Safari Adventure. The best time to visit Botswana is in the dry season from May till October. Wildlife during this time is at its very best with animals concentrated in ever increasing numbers at watering holes plus the thin bushes making more visible and easy to spot.

It is also during this time that there’s virtually no rain and the risk of malaria. The Okavango Delta, Moremi and Chobe are Botswana’s most popular parks and this is also the best time to visit

For those with particular interest in the Okavango Delta it is flooded from June to October. This is the best time to do the famous traditional mokoro dugout canoe activity at most of the lodges.

The wet season from December is a particularly good month as many antelope give birth then which means more predators.

Botswana has its own local currency the Botswana Pula (BWP).  It’s interesting to note that the word ‘Pula’ means rain and thebe (coin denominations) means shield.  All the major credit cards, including Visa, MasterCard, American Express and Diners Club, are accepted across the country at most hotels and lodges.  Most hotels and lodges accept foreign currency.

Currency Exchange bureaus are available at all major towns and at some border posts.

While cash of any amount is no longer restricted, any person entering or leaving Botswana is required to declare Pula and/or foreign currency bank notes in their possession if the amount is equal to or exceeds an equivalent of P10,000.00 (ten thousand Pula). A family unit must declare any amount carried by each member if the aggregate in the possession of the family is P10,000.00 or more.

Automatic Teller Machines (ATM) are located throughout the country at most shopping malls and major hotels and you get the local currency.

Botswana has endemic malarial areas particularly in northern Botswana during the warmer months from November to June. We advise all our clients to consult with their local doctor before travelling to Botswana and to take every precaution advised. Our Botswana Travel Info extensively gives you key information on this regard.

It’s advisable to take anti-malaria drugs as prescribed by your local doctor at least two weeks prior to the visit. All hotels and lodges in Zambia will have mosquito repellents and mosquito nets in the rooms.

Those traveling to Botswana and the region for the first time may experience salt depletion and heat exhaustion, particularly in the summer season. Symptoms include weariness, weakness, dizziness, nausea, vomiting and muscle cramps. Preventive measures include taking salt tablets, drinking plenty of water and fruit juices (drink at least three liters of liquid daily), avoiding prolonged direct exposure to the sun, and avoiding excessive amounts of alcohol as this causes dehydration. Use sunscreen at all times when in the sun and make sure you carry with you sunglasses and a sunhat.

Visitors should be aware of the prevalence of HIV and AIDS is throughout southern Africa, and Botswana is no exception.

Next in our Botswana Travel Info is the critical weather and climate. Botswana’s climate is semi-arid. Though it is hot and dry for much of the year, there is a rainy season, which runs through the summer months. Rainfall tends to be erratic, unpredictable and highly regional. Often a heavy downpour may occur in one area while 10 or 15 kilometres away there is no rain at all. Showers are often followed by strong sunshine so that a good deal of the rainfall does not penetrate the ground but is lost to evaporation and transpiration. ‘Pula’, one of the most frequently heard words in Botswana, is not only the name of Botswana’s currency, but also the Setswana word for rain. So much of what takes place in Botswana relies on this essential, frequently scarce commodity.

In our Botswana Travel Info we also look at the different seasons in Botswana. The summer season begins in November and ends in March. It usually brings very high temperatures. However, summer is also the rainy season, and cloud coverage and rain can cool things down considerably, although only usually for a short period of time. The winter season begins in May and ends in August. This is also the dry season when virtually no rainfall occurs. Winter days are invariably sunny and cool to warm; however, evening and night temperatures can drop below freezing point in some areas, especially in the southwest.

The in-between periods – April/early May and September/October – still tend to be dry, but the days are cooler than in summer and the nights are warmer than in winter.

The rainy season is in the summer, with October and April being transitional months. January and February are generally regarded as the peak months. The mean annual rainfall varies from a maximum of over 650mm in the extreme northeast area of the Chobe District to a minimum of less than 250mm in the extreme southwest part of Kgalagardi District (see the map for districts). Almost all rainfall occurs during the summer months while the winter period accounts for less than 10 percent of the annual rainfall. Generally, rainfall decreases in amount and increases in variability the further west and south you go.

Summer days are hot, especially in the weeks that precede the coming of the cooling rains, and shade temperatures rise to the 38°C mark and higher, reaching a blistering 44°C on rare occasions. Winters are clear-skied and bone-dry, the air seductively warm during the daylight hours but, because there is no cloud cover, cold at night and in the early mornings. Sometimes bitterly so – frost is common and small quantities of water can freeze.

In summer during the morning period humidity ranges from 60 to 80% and drops to between 30 and 40% in the afternoon. In winter humidity is considerably less and can vary between 40 and 70% during the morning and fall to between 20 and 30% in the afternoon. For tourists, the best visiting months are from April through to October – in terms of both weather and game viewing. It is during this period that the wildlife of the great spaces gather around what water there is – the natural waterholes and the borehole-fed dams – and are at their most visible.

This classic Kalahari environment is dominated by the silver terminalia, Terminalia sericea, identified by the silvery sheen on its blue-grey leaves and the Kalahari appleleaf, Lonchocarpus nelsii. You’ll also find some bushwillows, Combretum callinum, and wild seringa bushes, Burkea Africana.

One tree worth noting here is the Namaqua fig, Ficus cordata. This is well known throughout the central highlands of Namibia and down to the Cape – but otherwise unrecorded in Botswana. Here you’ll find it growing all over these hills, its roots often flattened against the rocks. Several strong specimens grow around the entrances to the Gcwihaba Caverns, green and thriving even during the dry season, perhaps due to the cooler, moister microclimate in the air of the caves.

Similarly, the mopane aloe, Aloe littoralis, is found here and throughout Namibia, but nowhere else in northern or central Botswana. It’s a striking plant with a single, vertical stem, succulent leaves with serrated edges and a flower head that branches into pointed spikes of red flowers.

All around the region you’ll certainly find the Devil’s claw creeper, Harpogophytum procumbens procumbens. Recognise it for its pinky-mauve flowers with a hint of yellow in the centre in January to March, and after that its small but wicked oval fruit that has hooks on all sides – like some tiny medieval jousting ball with grappling hooks. (This could be confused with the large Devil’s thorn, Dicerocaryum eriocarpum, which has a brighter pink flower but a much less elaborate fruit.)

The Devil’s claw is found all over the Kalahari, but has recently been in demand from overseas for its medicinal properties. Extracts of this are variously claimed to aid in the treatment of intestinal complaints, arthritis, and many other ailments. Hence anywhere near a centre of population is likely to be largely devoid of these plants, but in the more remote areas of the Kalahari you’ll often find it beside the sandy track.

Contact Us for more Botswana Travel Info and lets start planning your next Botswana Safari Holiday.

This website uses cookies to improve your experience while you navigate through the website. Out of these, the cookies that are categorized as necessary are stored on your browser as they are essential for the working of basic functionalities of the website. We also use third-party cookies that help us analyze and understand how you use this website. These cookies will be stored in your browser only with your consent. You also have the option to opt-out of these cookies. But opting out of some of these cookies may affect your browsing experience.
Necessary Always Enabled
Necessary cookies are absolutely essential for the website to function properly. These cookies ensure basic functionalities and security features of the website, anonymously.
Functional
Functional cookies help to perform certain functionalities like sharing the content of the website on social media platforms, collect feedbacks, and other third-party features.
Performance
Performance cookies are used to understand and analyze the key performance indexes of the website which helps in delivering a better user experience for the visitors.
Analytics
Analytical cookies are used to understand how visitors interact with the website. These cookies help provide information on metrics the number of visitors, bounce rate, traffic source, etc.
Advertisement
Advertisement cookies are used to provide visitors with relevant ads and marketing campaigns. These cookies track visitors across websites and collect information to provide customized ads.
Others
Other uncategorized cookies are those that are being analyzed and have not been classified into a category as yet.
SAVE & ACCEPT